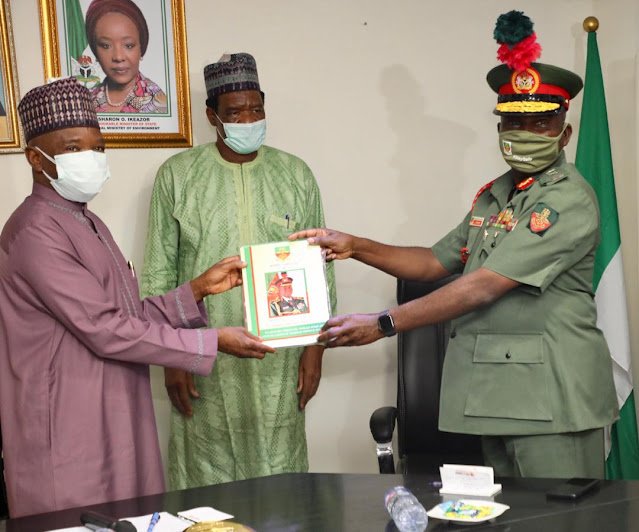 The Federal Ministry of Environment donates 5Million seedlings of various species to assist the Nigerian Defence Academy (NDA), as part of its efforts to meet President Muhammadu Buhari's target of planting 25million trees within the year 2020 to mitigate the effects of climate change in the country.
The Minister of Environment Dr. Mahmood Abubakar made this known recently when he received a delegation of NDA's top brass led by its commandant Maj.Gen. Jamilu Shirham.
The Minister Dr. Abubakar emphasized that " inline with the Military Protocols of immediate effect", I am directing the Forestry Department to commence the release of the five million tree seedlings to the Prestigious Military Academy within the shortest period of time.
He also assured that the Ministry is willing and ready to partner and collaborate with NDA in the area of effective waste management among others.
According to the Minister, even though Nigeria is battling with Corona virus , climate change issues are still far worse than Covid 19.
" He said that long after Corona virus might have gone, there will still be climate change issues".
Dr. Abubakar further noted that the Ministry of Environment has taken Proactive measures in waste management and particularly Recycling with the concept of circular economy.
We have from the three Rs which are Reduce, Recycling and Reuse, moved further into Repair and Recover.
So the economy has changed from the Standard Production, Usage and Disposal. We cannot afford that anymore as it is detrimental to climate change, action,environment and the countries resource base, he added.
The Minister , while pointing out that both the Military and the Environment must have a synergy to be able to achieve their peculiar objectives, he said the task of decontaminating and disinfecting the NDA campus is the Ministry's responsibility. And not something the NDA management must ask or show appreciation for.
His word"  I can assure you that from this moment , there will be a permanent partnership and collaboration between the Environment Ministry and the Armed Forces of Nigeria. We will do everything humanly possible to assist you whenever you come to us for you to undertake the greeny of your environment, shows that you are ambassador of climate change action."
Also, Maj. Gen. Shirham earlier disclosed that they came to thank the minister and his team for disinfecting and decontaminating the NDA campus.
According to him, the minister's kind gesture has boosted the morale of the cadets, as they are now assured that the environment they are kept is safe.
The NDA commandant equally added that as part of its desire to totally green its campus, the school management has mandated every cadet to plant at least 100 trees.
However, he appealed to the minister to assist them with 5million seedlings, so that they can actualize their laudable goal.
Shirham, while seeking the ministry's collaboration to organize an International conference on Security and Environment, maintained that part of the reason insurgency is rife around Lake Chad region is due to deforestation as the whole area is "badly" degraded.
Saghir el Mohammed
Director Press( FMENV)
Read more

climate
By lemagazine.com.ng at Friday, June 12, 2020
Email ThisBlogThis!Share to TwitterShare to FacebookShare to Pinterest
Tags climate