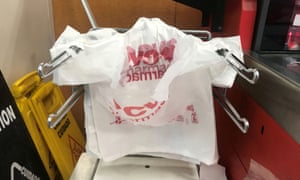 Every year, New York state gets through a staggering 23bn plastic bags – the vast majority of which end up in landfill or polluting streets, green spaces and waterways.
But it is hoped the single-use carriers will become a relic, now a long-awaited state-wide ban on single use plastic bags has come into force.
The new law means most businesses will no longer be allowed to provide or sell plastic bags. However, it will not completely outlaw plastic bags. Notable exceptions include takeaway and delivery food, prescription drugs, rubbish bags, uncooked meat and fish and some non-film plastic “reusable” bags.
Governor Andrew Cuomo hailed the ban, which went into effect on Sunday, as a “bold action to protect our environment and ban these environmental blights”. Handing out free tote bags in Manhattan, New York mayor Bill de Blasio told New Yorkers: “We only have one chance to save our planet.”
New York is the third state after California and Oregon to enforce a state-wide ban. The counties of Hawaii have individual bans. Other states set to follow suit include Maine and Vermont this year and Connecticut and Delaware in 2021.
Initially, the New York Department of Environmental Conservation said it planned to focus on education rather than punishment for those who do not abide by the ban. In recent weeks, signs have appeared in shops alerting customers to the changes and a social media campaign is urging people to “bring your own bag”. Free reusable bags are being offered to low-income households.
In the long term, businesses that do not comply after a warning can be fined $250 for a first violation and $500 for any further violations in the same year.
Some local authorities, including New York City – which alone gets through 10 billion plastic bags annually – will charge a 5¢ fee for paper bags.
Mark Chambers, director of the New York city mayor’s office of sustainability, said: “The paper bag fee coupled with the bag ban encourages a deeper culture shift in New York City towards reusable habits. This is a critical shift we need to cultivate if we are to meet our zero waste goals.”
City authorities recently pledged to cut use of single-use plastic cutlery, foodware and bottles and to seek a reduction on plastic straws. New York state is considering a ban on single-use styrofoam containers.
But are New Yorkers ready to give up their dependence on plastic?
Sierra Graham, 24, a student from Brooklyn, said: “It’s definitely possible for New Yorkers to adapt and change because that’s what New Yorkers are known for. So I think a lot more people will be going in for tote bags, coming more prepared, since some stores are already enforcing things like that.”
Egon Zippel, 59, a visual artist, said: “I think it’s great and it should have come much sooner. So yeah, I’m happy they’re implementing it.” He thought the charge for paper should be higher.
Others were less optimistic. 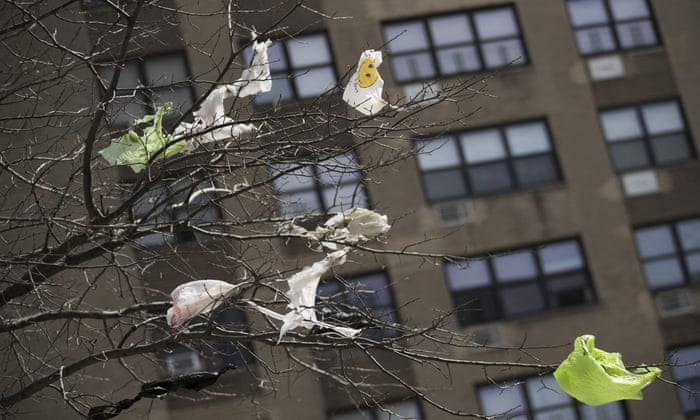 Jessie Moore, 22, a market worker, said: “Although those signs are up and we’ve received warning about it I think people are still going to expect to be receiving plastic bags and just will be unsure how to transport their stuff.”
Angela Zhou, 38, manager of a nearby grocery store, said: “I don’t know where I can buy the paper bags. They say the paper bag for the customer costs five cents, I think if we bought it, it would probably cost more money.”
The Food Industry Alliance of New York, which represents around 800 stores across the state, has “major concerns” about the new law.
Kristina Wieneke, the organisation’s vice-president of government affairs, said: “Retailers are concerned about the anticipated backlash from the public … grocery stores typically operate within a 1%-2% profit margin. This additional financial burden will certainly have consequences for the industry.”
Environmental campaigners said the ban was a landmark moment.
Dianna Cohen, chief executive and co-founder of non-profit Plastic Pollution Coalition, said: “It’s just a way of helping people open their eyes to begin to see the plastic pollution problem … I look at these laws as ways for people to get started in the right direction.”
source: theguardian
Read more

Foreign
By lemagazine.com.ng at Wednesday, March 04, 2020
Email ThisBlogThis!Share to TwitterShare to FacebookShare to Pinterest
Tags Foreign